Polenta With Arugula (topped with mushrooms I also had on hand) was a delicious solution to the problem of overabundance. (Photo by Laura Groch)

Can a Californian have too much arugula?

I’m a fan of this peppery little salad green, and one day at the supermarket I was seduced by the sight of a large plastic container of arugula  — one pound — on sale — for $1.69.

I could not resist.

So I brought it home. And I started adding handfuls to my salads.

We ate several days’ worth of salads featuring the green — but I noticed I wasn’t exactly making a dent in the box. 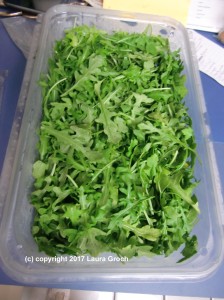 A one-pound bargain box of arugula was a challenge to use up. But I discovered a great recipe. Photo by Laura Groch

So I started adding arugula to my sandwiches instead of lettuce. This tasted pretty good, especially in sandwiches on Italian bread made with Italian cold cuts.

But the arugula in the box didn’t seem to be dwindling. (Was it replenishing itself while I wasn’t watching?)

By now I was starting to get a little tired of arugula salads. And the box had been in the fridge for about two weeks. What to do? I didn’t want it to spoil — that negates the “bargain” part of the purchase — but I was starting to verge into arugula obligation territory, where I felt it had to be added to anything salad-y.

It was time to consult the Internets, which reminded me that this green can also be cooked. I found a lovely recipe by Giada di Laurentis that basically just simply stirred the arugula — four cups of it — into polenta as it cooked. Add butter and cheese, and oh yes!

This was a delicious solution, right up an Italian’s alley, and meatless to boot for those who are always on the lookout for veggie recipes.

But afterward — when I looked in that big plastic box — I still had a more than a few handfuls left of arugula.

Cooking the arugula in the polenta was easy to do, and turned out terrific. Photo by Laura Groch

Then it dawned on me. Arugula, after all, is a leafy dark green — like spinach. How had I forgotten that? I steamed the rest of the leaves into submission, seasoned them with olive oil and garlic, and put it over pasta with some cooked mushrooms. Ahhh, good (and also meatless).

However. I think I’ll stick to buying my arugula by the bunch from now on.

Unless it’s on sale, that is.

Springtime means lots of nutritious leafy greens coming into home gardens and supermarkets, so try this recipe with other greens like spinach, chard or kale. It’s from Giada De Laurentiis. I used half the butter, a little less cheese, skipped the heavy cream and added another cup of arugula. Still terrific:

1 1/2 teaspoons salt, plus more to taste

Combine the water and salt in a heavy large saucepan. Bring the water to a boil over high heat. Gradually whisk in the polenta.

Decrease the heat to medium-low. Stir constantly until polenta thickens, about 5 minutes. (Note: Keep a lid handy to cover the pot as needed, as the polenta will start to erupt and spurt as it thickens.)

Add the garlic and arugula, and stir until the arugula is wilted. Stir in the butter, cream and cheese, if using. Season the polenta to taste with salt and pepper. Six servings.

One thought on “Too much arugula? Polenta to the rescue”