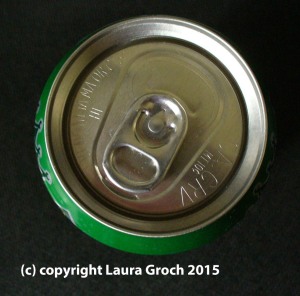 What makes more sense: Recycling a whole can…? (Photo by Laura Groch)

My boss once gave me an assignment: People were collecting a million poptops from beverage cans and using the money made from recycling them to help a little girl who couldn’t afford dialysis treatments. What a great human interest story! Find out who the little girl was and what was going on. Here’s the phone number of the woman who called it in.

Me: “So who is the little girl you are collecting for?”

Mrs. Smith: “Well, I don’t know her exactly, but my sister’s office is collecting for the little girl, so our office is doing it too.” 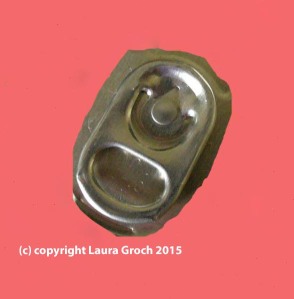 … or recycling just the pop top? (Photo by Laura Groch)

Me: “OK, can you give me your sister’s contact information please? I’d like to find out more.”

Mrs. Smith’s sister: “Well, we don’t know the little girl exactly, but my boss’s wife is collecting at church for her. Here’s her name and number.”

Mrs. Smith’s sister’s boss’s wife: “I heard about it through my cousin. He knows someone who knows the little girl’s family. Here’s his name and number.”

Mrs. Smith’s sister’s boss’s wife’s cousin: “Oh, I don’t know the little girl, but my neighbor does, so we’re giving her all the poptops my youth group is collecting.”

Do you see a pattern here? So did I. My next call was to the regional branch of the National Kidney Foundation. They assured me that anyone who needs dialysis gets it, and doesn’t have to collect poptops for it. They also pointed out that it made a lot more sense to sell the entire can (which, after all, weighs more than just the pop top to recyclers. But (they sighed) this has been going on for years. People can’t be persuaded to donate the whole can. They are fixated on the poptops.

That was a good many years ago — before the Internet, kids — and I was amazed to see that this rumor is still making the rounds. A few weeks ago, a friend of mine in the restaurant business told me that she’d been asked to save poptops from discarded drink cans for two women who were collecting — for “someone else.”

The rumor has been so hard to knock down that some groups have decided they can’t fight the public any more. McDonald’s (for Ronald McDonald House) and the Shriners (for their children’s hospitals) are two that have bowed to the public’s desire to do good, and they will accept the poptops. (But please, ask first before you deliver yours.)

What do these groups do with them? They thank their benefactors, and turn in the poptops (or pull tabs, in an earlier iteration) for recycling — wishing, no doubt, that they had all the hundreds and hundreds of cans the poptops were once attached to in order to get THAT money.

The thing is, these are all well-meaning people trying to do some good. Gosh, if that itty-bitty piece of metal will help some little tyke get kidney dialysis (or a wheelchair, or chemotherapy treatments) — well, who wouldn’t want to donate? And tell their friends?

“… A million pull tabs have a recycle value of about $366 U.S. And that’s before you factor in what it costs to collect, store, and transport them to a recycling center which will pay cash for them. When you consider the time and effort it takes to collect a million of anything, it’s a wonder anyone would go to all that trouble for a mere $366. Far better to ask everyone you know for a penny in place of each pull tab they would have given you — at least then when you were done collecting your million, you’d have $10,000 to donate to your charity.

“To put this in even clearer perspective, 100 pull tabs have a scrap metal value of about 3½ cents …”

You can try to disabuse people of the inefficiency of their efforts when they ask you to save poptops for them, but it won’t be easy. The poptops are doing SOME good. They just aren’t doing a whole LOT of good. You (or your group) would be better off collecting the whole cans, recycling them, and donating that money to charity — or as Snopes points out, making a cash donation instead. Good luck!