Lychees are a delicious fruit, hidden behind a nubbly reddish-brown shell. Photo by Laura Groch

If you’re a fan of the Honeymooners (and I hope you are), you might remember the phrase, “sweet and sour leechee nuts.”

That was the treat Ralph Kramden offered his long-suffering wife, Alice, as the finale of dinner at her favorite Chinese restaurant, Hong Kong Gardens.
I thought “leechee nuts” were a figment of someone’s imagination until I ran into
mentions of them in a few other places, more often spelled lychee. Still, it’s not as if they were a common food, or fruit, or whatever they were.
Well, turns out they’re a fruit, and they’re grown in San Marcos, among other parts of California and Hawaii and Florida, too. And they’re delicious.
As you might guess, these trees originate in China, and according to the California Rare Fruit Growers Association website, the lychee “reached Hawaii in 1873, and Florida in 1883, and was conveyed from Florida to California in 1897.”
The CRFGA says lychees “can be successfully grown in frost-free coastal areas of California. There are trees in San Diego … that are over 90 years old with no sign of decline in sight.”
The season is mostly late spring and summer, but extends into October for some species. Off-season, you might be able to find them canned in Asian markets. (Rambutan and longan are from the same family and are very similar in texture and flavor.) 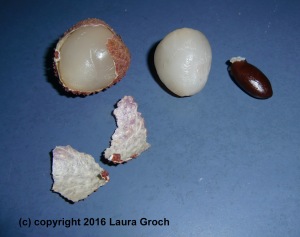 The lychee may have come by the “nut” monicker because it’s enclosed in a nubbly reddish-brown casing about the strength and texture of an eggshell. Crack it gently at one end and peel off the shell to reveal a pearly white fruit about the size of a large grape. The texture is like that of a juicy grape, too, and the fruit is perfumed and sweet. Just don’t bite too hard — there is a large, inedible “nut” or seed inside.Nutritionwise, the USDA says lychees are a decent source of potassium and vitamin C, with a couple of grams of fiber per cupful. Enjoy your lychees fresh as a tasty snack, or add to a fruit salad. Try them in smoothies (remember to pit them first!), or turn them into jam or syrup.

Some people halve them and stuff with cream cheese, as you might do with dates for an appetizer. Or pair them with pork or chicken the way you’d use peaches or nectarines, or try them in a fruit salsa.
I’ve read that the unpeeled fruits can be left to dry, and that the fruit inside becomes like a raisin.If you spot lychees at a specialty or farmers market (I’ve seen them at the Vallarta supermarket on occasion, but you have to be sharp-eyed), try a few handfuls. I think you’ll enjoy this different and appealing fruit.
(c) copyright 2016 Laura Groch

2 thoughts on “Will you like lychees? You’ll have to find them first”